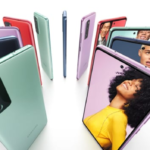 Pixel 5 and Pixel 4a 5G
Google

There are three really good Android phones that recently launched that you should know about, in case you’re looking to upgrade but don’t want the iPhone 12. They all include 5G, like the new iPhones, so you’re future-proofing yourself if you plan to hold on to your phone for the next couple of years. They also have solid cameras. And they’re all cheaper than the standard iPhone 12, which starts at $799.

Samsung’s Galaxy FE was released earlier this month. It offers lots of features found in Samsung’s more expensive flagship phones but starts at $699 instead of $999 like the Galaxy S20 phones. It’s made out of aluminum and plastic — that’s one place Samsung cut costs — but still has a high-end Qualcomm 865 processor, a sharp and colorful screen, and is water-resistant. And, like the iPhone 12, it’s available in a bunch of colors, such as red, blue, purple, and green.

It’s also got a couple of features the iPhone 12 doesn’t have. It’s equipped with a high-refresh display, for example, which is smoother than the one on the iPhone 12 for things like scrolling through websites or Twitter. It also has a fingerprint reader under the screen, which is useful for unlocking your phone while wearing a mask (which makes facial recognition unlocking, like Apple’s FaceID, harder). I like that it has a microSD card so I can expand storage to download more movies and games.

The Google Pixel 5 costs $699 and is a good pick if you want a phone that’s not too big and is easy to use with one hand. I really like the color screen, great camera, and long battery life. It also feels really fast, despite a mid-range Qualcomm processor.

That’s because Google put a lot of work into optimizing the software. It has a fingerprint reader on the back — again, useful if you’re wearing a mask — and can do some of the things an iPhone 12 can, like night-mode portrait shots. I also really like the soft-touch aluminum body, which doesn’t get smudged up with fingerprints, and the unique green color Google sells.

Finally, Pixel 5 comes with a few Google-exclusive features I love that aren’t on other Android phones. The voice recorder app automatically transcribes interviews to text, for example. It can detect if you were in a car crash and automatically dial 911. It has excellent spam call screening features, too.

OnePlus made its name as a company selling affordable phones with flagship-level specs. Its prices had started creeping up in recent years, but the OnePlus 8T reverts to the original model, offering high-end specs in a phone that starts at only $749.

OnePlus phones are also known to be super speedy, and the OnePlus 8T keeps that promise.

It has a colorful and premium metal and glass design, like the iPhone 12. Plus it has one unique feature I really dig: It can fully charge in 39 minutes, faster than any other phone I’ve tested — the iPhone 12 charges to 50% in about a half-hour. But, you don’t get wireless charging or any certified water resistance rating, two things I like to have.

Like the Galaxy FE, it has a fingerprint reader that works well and is hidden on the screen. The cameras are good enough, but I prefer the pictures from the Pixel 5 and Galaxy FE. But, you still get wide-angle, ultrawide-angle, and a macro lens for lots of different types of photos, from pictures of landscapes to really close-up shots.